Valence, a growing teamwork platform, today announced that it raised $25 million in a Series A round led by Insight Partners. Co-founder and CEO Parker Mitchell said that the tranche will be used to triple the size of the company’s team to 75, expand its sales footprint (particularly in Europe), and build out Valence’s product team.

What constitutes a “teamwork platform,” exactly? Mitchell describes it as a set of tools for talent and development, specifically teams-based coaching, in an organization. Valence lets managers track team performance by certain metrics and, if they deem it necessary, intervene with “guided conversations.”

“[I] believe a new category of digital team based tools will emerge. These tools will focus on learning and collaboration together, in teams, which is where work is done. It will take the best practices that coaches and facilitators offer top teams and make them available for any manager. And in doing so, it will transform how people work together, learn, and grow at work,” Mitchell told TechCrunch in an email interview. “At Valence, we believe that one of the most important skills people can build is the muscle of working better with a wider range of people, so we create tools that allow team leadership to improve and for people to work better with colleagues and teammates. ”

Mitchell co-launched Valence, which is New York-based, in 2017 with Levi Goertz. Prior to Valence, Mitchell was a consultant at McKinsey and co-founded the nonprofit Engineers without Borders and Significance Labs, the latter of which was folded into the Robin Hood Foundation. Goertz, who spent several years at Engineers without Borders, was also a McKinsey associate and co-founded his own company, Viamo, which he led as COO for four years.

Mitchell says that Valence’s mechanics sprung from his previous working for — and managing — large organizations. To wit, the platform has team members complete surveys that ask them to rate the truthfulness of statements like “We make decisions quickly” and “We focus on the most important things.” Based on the responses, Valence generates a discussion guide for managers as well as area-of-focus recommendations.

Using Valence, teams and managers can set a shared plan and revisit that plan every couple of months to see how they’re progressing, and identify new issues as they emerge.

“The challenges companies are facing scaling hybrid workplaces and managing retention in this market is accentuated because people aren’t getting the learning and development opportunities that they should. So Valence takes the core principles of teamwork and facilitation, leadership, learning, and growth and puts them into a product,” Mitchell said. “There are a flurry of tools that provide capabilities just focused on performance activity tracking, [but Valence’s platform] Focuses on the elements of collaboration and helps teams and leaders deepen trust.”

Valence also encourages teams and workers to commit to new habits, like devoting quiet time to intensive work, via email reminders. And it offers personality assessments, allowing team members to see which colleagues prefer structure, for example, versus more flexibility and adaptability.

Valence has impressive traction to be sure, with customers including Fortune 500 brands like Coca-Cola, Boston Scientific, Illumina, and Applied Materials. But, as with rival performance management systems (eg, Humanyze and Lattice), it’s limited in what it can accomplish without buy-in management. According to Gallup data, employees whose manager involves them in setting goals are four times more likely to be engaged, yet only 30% of employees experience this. A shockingly high number of organizations were using spreadsheets only a few years ago as their primary way to track performance metrics. 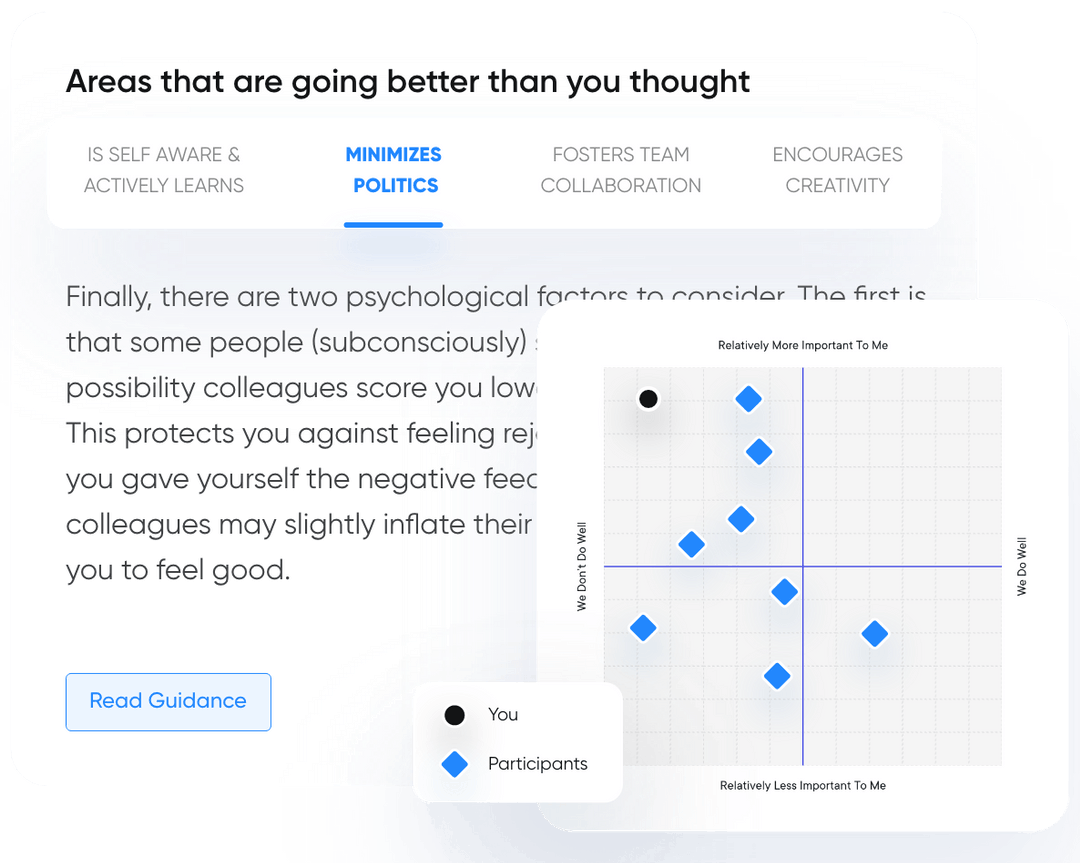 Some might take issue with aspects of Valence’s approach, also, particularly the reliance on personality assessments. (A recent piece in The New York Times called psychometric tests such as Myers-Briggs, the DiSC model, and Color Code “the astrology of the office.) Mitchell positions Valence as an affordable alternative to professional coaching. However, it’s unclear how effectively surveys, semiregular dialogues, and emails can replace one-on-one guidance.

Even if Valence falls short in certain areas, Mitchell argues, it’s still superior to the off-the-shelf, one-size-fits-all set of trainings most employ companies.

“Top leaders receive game-changing investment to attempt to build these teams — facilitators and coaches offer bespoke interventions to help them learn new mindsets and improve how they understand and relate to one another. But the top 1% of employees receive 90% of this investment … we believe that technology will change that,” Mitchell said. “C-suite leaders buy the platform for two reasons. First, they can offer their managers and teams support at a global scale — instantly. Second, they get intelligence on how the teams are performing against benchmarks and learn where to target their support and how to better enable and retain their employees.”

Working in Valence’s favor is the general rise in spending on HR tech. Venture capital investments in HR software and services soared past $17.5 billion last year. And, while companies admit to challenges in integrating new technology into their existing HR workflows, the majority expect to pilot more of it in the future.

“We’ve suddenly landed in a once-in-a-generation shift in how work is done, and in how enterprises think about leadership, teams, and collaboration. While the first six to nine months of the pandemic were focused on ensuring people could work, the world has pivoted to helping people work well, and interest in Valence skyrocketed,” Mitchell added. “[C]ompanies use Valence to help tens of thousands of their managers and employees to work better in teams … because they know that teamwork and collaboration is crucial for both employee engagement and performance.”